Yet another Ramadhan has passed, and yet another less than satisfactory ending. Eid ul Fitr on the first day of the month of Syawal in the Hijri Calendar is supposed to be a celebration of a ‘return to fitra’, a state of natural being in the order of the universe, the purposeful existence in the eyes of the Creator, a rebirth of sorts. Instead, a sense of restlessness took its place; vocational challenges, coupled with sub-optimal health and peppered with some navel gazing made up the ingredients of this deflatingly served dish.

Why was this so? Approximately seven sun-rotations ago, the mutawwif who guided my family’s conditionally compulsory Meccan pilgrimage had remarked that the whole Hajj experience was intended as a training ground for the times that came after. It made sense at the time, for the rigours and experience of Hajj is not quickly forgotten and would serve well months after leaving the Holy Land. I had inadvertently applied this logic to the month of Ramadhan as well; it seemed entirely reasonable that the ‘training ground’ rationale was equally applicable here. Having just experienced my forty-ninth cycle in my lifetime, I have come to the conclusion that it was just the opposite: the rest of the year was, in fact, preparation for the momentous month.

There were several reasons: firstly, the cyclical nature of the twelve months meant that we would repeatedly be, God willing, facing Ramadhan again and again. It is as if we are at a sports training facility practising for an annual event. Secondly, the cyclical nature also infers that there should be improvements in the future cycles. As is often the case, one often leaves the rigours of Ramadhan far behind in the other months, typically reverting to type, lending gravitas to the observable phenomenon of ‘Ramadhan Muslims’. This is due to the fact that the ‘training’ and ‘tournament’ is not planned to be cumulative but rather a turn of the hamster wheel. Thirdly, within Ramadhan is probably the most important night of all nights, the Night of a Thousand Nights, better known as ‘Lailatul Qadr’. This mysteriously placed night (where there are signs given, but only God knows for sure) contained within the last ten days of Ramadhan promises multifold rewards for those who seek and experience it. This phenomenon breaks down the “training-tournament” analogy, but implies an attitudinal concept instead: to achieve the full rewards in Ramadhan, it is not enough only to be a Competitor, but one also needs to be an active Seeker.

Taking this strand of thinking further, perhaps only the Restless Seeker stands a chance of fully experiencing the Nectars of Ramadhan. Many yearn for the ecstasy of having maximised one’s Ramadhan but piercing that veil would probably require an intertwined tapestry of ponderance and prayers, whose exposition is far beyond the capacity and capability of this writer. Perhaps a more achievable aim would be to explore one important strand of that lofty goal with a preparation of an oft-practised but maybe un-maximised action: that of Quranic Recitation.

One of the names for Ramadhan is Shahr ul Quran, the month of Quran. Not only was the first verse of the Quran (Surah al-Alaq, the 96th) revealed during this month, but also reciting the whole Quran is highly recommended and is common practice among Muslims. In this regard, I have insofar failed miserably at achieving this. Often when I finally get around to reading it, it is slowed down by looking at the meaning and trying to ascertain the message. Therein lies the heart of the problem; I could never seem to grasp the Quran as a whole, and therefore fail to contextualise what I am reading. For one trained as an architect who designs buildings and townships with complex relationships that need to function as a whole (and add to that a penchant for phenomenology), and now as a management consultant who constructs strategies for transformation programmes for companies and systems that need to run in tandem, the Quran is but a black box of seemingly incoherent parts.

The search for a Gestalt-conception of the Quran has been a personal pre-occupation for many years. I have been searching through many English translations of the Quran, as well as books about the Book especially concerning thematics and conceptual frameworks. The former had taken me through from the de facto Yusuf Ali translation (I much prefer ‘ye olde’ version with a poem to introduce every surah), to the dogmatic Mawdudi, the poetic Sayyid Qutb, the new standard bearer Mohsin Khan and ending with the fascinating Muhammad Asad. For the latter, Muhammad al-Ghazali et al helped with thematics, M.M. Al-Azami with the history, Shetha Al-Dargazeli with the names of Surahs, and many others with specific interpretations of different Surahs, as well as Naisaburi’s exposition of why certain Surahs were revealed. Furthermore, the works of two of my favourite Sheikhs, Ustaz Nouman Ali Khan and Shaikh Yasir Qadhi (these two often through videos) were copiously referred. However, the real breakthrough happened in the last five years, starting with my discovery of Amin Ahsan Islahi ‘Tadabbur-i-Qur’an’ and Muntasir Mir’s study of his approach, further elaborated in Nouman Ali Khan and Sharif Randhawa’s ‘Divine Speech’. It was from that last book that I found earlier though recent works of Raymond Farrin (the discoverer of the Ring Theory in the Quran sometimes seen in videos) and Neal Robinson, both currently under study.

It is my hope to synthesise the knowledge from these and other sources into a holistic conceptual framework of the Quran, using Farrin’s Ring Theory as a point of trajectory. The primary objective remains as lending meaning to Quranic Recitation during the next Ramadhan, God willing. Gestalt and Visual Communication approaches will also be integrated, devices that make up much of my training and current way of thinking. Honestly, it is really for my own convenience and comprehension, but I hope it works for you too.

The next post will introduce some structural mechanics of the Quran, including how the Surahs may be grouped (we shall discuss approaches by different scholars), as well as the Ring Theory. Stay tuned. 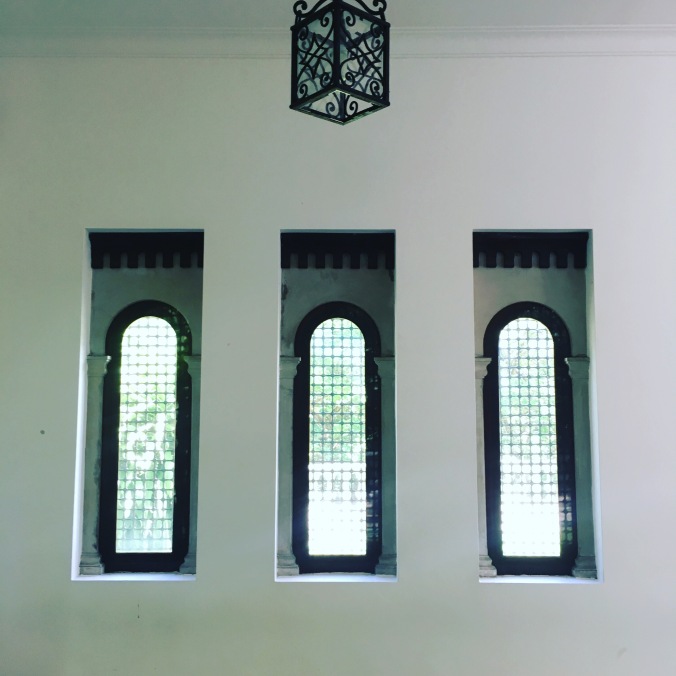 “Will they not then earnestly seek to understand the Quran, or are there locks upon their hearts?”

“It is ironic indeed that the Quran that places so much emphasis on pondering and serious study of its contents in order to gain any real benefit, is also perhaps the only book that is read without any serious thought or attention to its message or substance. Ordinarily, when studying a book, most people would first prepare themselves mentally. In the case of the Quran they usually close their minds the moment they open it up to read”

So yet another Ramadhan approaches, and I echo the thanks of many Muslims that we are alive to greet another of the blessed month. The zeal with which many greet this time of the Islamic calendar year is often great, but undoubtedly for many this does not quite last. Once work and family pressures pile, it is all to easy to slip back into the normal routine, albeit with different meal times.

I am not here to offer a formula to avoid the aforementioned. One only needs to peruse one’s Facebook and subscribed Youtube channels to access countless pieces of advice by the Masyaikhs and friends (usually reposts of the Masyaikhs) alike, much of which are of great use if followed. I can almost hear the countless covers of the Quran being opened (um, just dust it off first, ok?) and pages turned, so many eager to finally finish a full reading by month end. My personal efforts throughout my life have been rather mixed, more often than not significantly short of initial targets. Being a realist, then why not set lower targets, I thought to myself. Why not indeed.

A few days ago, I had updated my Facebook status, which reads “Salam all, hope you all have a wonderful and reflective month of Ramadhan – Rediscover your purpose. Realign your compass. Refresh your target of the ultimate destination. May your journey be blessed and fruitful. Ramadhan Mubarak”. Reflect, rediscover, realign, refresh – not too shabby as goals. Now how could I achieve all that while making it achievable? The answer that came to me is to look in the direction of Bovines. Really.

The link between the month of Ramadhan and the Quran is unmistakable. The Prophet Muhammad (peace be upon him) was visited by the angel Jibreel on the 17th night of Ramadhan, upon which he received the first ever Revelation in the form of the first five verses of Surah Al-Alaq (The Clot 96:1-5). However, the Quran we have today was not arranged in chronological order;  the Prophet (peace be upon him) arranged the verses as they were revealed through divine guidance. The closest I have come to comprehending the order was covered by my earlier post here.

In that post, it was the approach of the main text that was discussed, Amin Ahsan Islahi’s “Tadabbur-e-Quran” (Pondering over the Quran), that in order to understand the nazm of ‘coherence’ of the Quran, the author had attempted to address the longest Surah in the Quran first and foremost, as it represents the most complex structure of all surahs. This is of course Surah Al-Baqarah (The Heifer, thus my bovine referral), the second surah in the Quran which contains 286 ayat. As today is the third day of Ramadhan, those of you who target to complete the full recitation of the Quran would most probably have completed this surah already, and have moved on to others. My target this year is to read and appreciate the overall meaning of this surah, inshaaAllah.

For those who are interested, I will be giving a talk entitled “Treading the Path of the Heifer’s Gaze: The first Five Ayat of Surah Al-Baqarah” in two week’s time at 3-4pm on 3rd July at UNIEC Inspire, Level 9, UNITAR Kelana Jaya Campus.