Today I went for my first Solat Jumaat (Friday Prayers) at Masjid Bulat (officially known as Masjid Tun Abdul Aziz) in Section 14, Petaling Jaya for quite a while. If you ask me to recall what it was about…. ummm, well, the khatib mentioned about characteristics that are desirable in a Muslim, sifat mahmudah, and ummm… yup, that’s the limit of my recall. I did not sleep, mind you, unlike many others around me. But I did not leave the mosque feeling enriched by the sermon.

Yet the khutbah (Friday Sermon) is such a wonderful opportunity to touch so many lives. Many, if not most male Muslims make an effort to attend, and for those who are concerned, one who enters the mosque early gets the most rewards as recorded by the Angels that stand at every door of the mosque until the Imam sits on the pulpit (Sahih Muslim, Book 4, Number 1864). According to Ibn Kathir’s Interpretation of Sural Al-Jumaah, one is prohibited from participating in buying and selling after the first Azan – you can often see in Makkah that all traders shut down prior or upon hearing the Azan. Yes, stop eating dude, the khutbah is starting already!

For the last couple of years, the mosques in Malaysia have started using Powerpoint slides during the khutbah. I have long been an advocate of this – I had thought that a visual presentation would surely be able to combat the sitting slumber that happens during the khatib’s speech. Moreover, many Friday mosques have air-conditioning which adds much comfort for the attendees who otherwise had to contend with the high humidity. Alas, in general, the Sandman’s actions seems even more prevalent and even potentially aided further by the cooler environment. Things do not seem to be improving. So for what it’s worth, I am putting down a wishlist for the weekly Friday khutbah, with the hope that it leads to a much higher level of spiritual efficacy. It is divided into two sections; a wishlist for the attendees, and a another for the khatib and mosque committee.

For Muslims going to Solat Jumaah at the Masjid:

Then there are things that the khatib and Mosque Administrations could do: 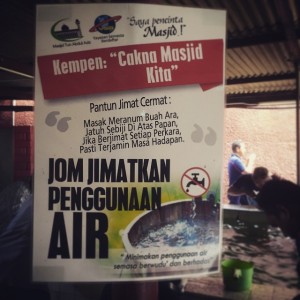 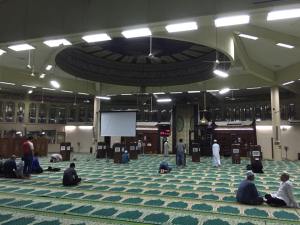 Inside Masjid Bulat after Maghrib

One thought on “All I Want for Jumaah is…”